So it begins. Over the last couple of days I’ve been assembling and collating information about indigo, woad, and fermentation vats. I’ll post a summary in due course; today I started my first woad vat using my first ‘best guess’ for a process based on my reading. It’s largely based on the instructions for a woad vat in Liles’ The Art and Craft of Natural Dyeing, but without the addition of indigo powder: I want to see what blue I get from 100g of woad ball before I add indigo. I aimed for the pH levels described by Dorothy Miller in Indigo, from seed to dye.

In Indigo Jenny Balfour-Jones describes the couching of woad balls. According to her sources, when the process is complete good woad is dry and mouldy, a condition known as “well beavered”. Mine wasn’t completely dry (I’d left it covered), but it was covered by a remarkable fine grey-white mould. The entire couching process seems to have taken place very quickly, perhaps because I used rainwater rather than tap water to avoid chlorine and other inhibitors of bacterial growth: on 7 May I crushed 100g of woad ball, moistened it with rainwater, and set it next to my desk so I could see what happened. I kept a lid on the dish to retain moisture. It heated up within hours; I turned it on the 8th and again on the 9th, by which time it was cool. 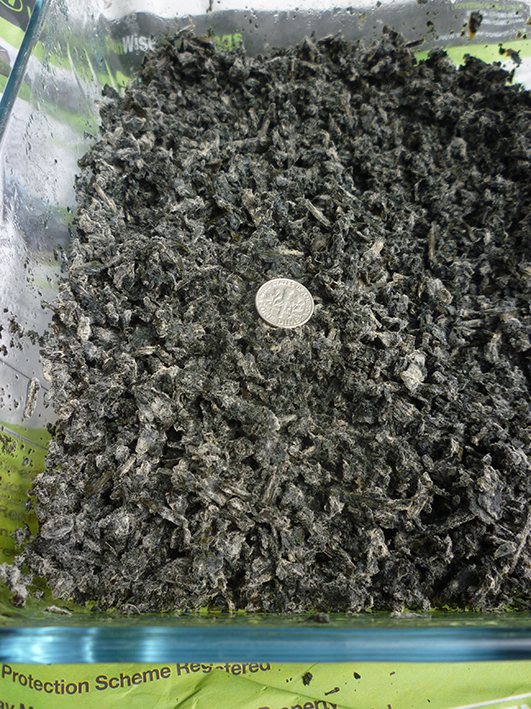 I assembled my kit. The white bin holds 25l/6 gallons; the black strip on it is a liquid crystal thermometer, and the orange thing is a ‘brewer’s belt’ that should maintain a good fermentation temperature, somewhere between 22-28°C. I plan to put that coil of plastic mesh or something similar at the bottom of the vat to keep cloth and fibre away from the fermentation debris.

Liles gives quantities for 6-8 gallons; I halved them for a 3 gallon/12.5 litre vat to begin with, and used washing soda rather than lye as an alkali. I dissolved 0.5oz washing soda in 1 litre hot boiled tapwater (boiling should drive off the chlorine), added 0.5oz wheat bran (slow release carbohydrates to fuel fermentation) and 0.5oz madder root (traditionally added because the bacteria on the roots kickstart the fermentation process). I left this to soak for an hour to hydrate the bran before pouring it into the bin and adding 8 litres of rainwater (total 9 litres). I boiled 2 litres of tapwater, added 1.5 litres of rainwater, and brought the entire volume to 70°C on the stove: woad contains both indican, the precursor for indigo blue, and isatan B, a related compound that will create blue, but which according to Balfour-Paul requires a higher temperature at the start of the fermentation process followed by rapid cooling.

I scraped the couched woad into the hot water, stirred it thoroughly for 5 minutes, then dumped it into the vat solution to cool it rapidly.

Maintaining the correct pH range is critical for a healthy fermentation vat, and the dyeing process. If fermentation is too enthusiastic, lactic and other acids will drop the pH to the point that the vat will not dye. The acidity must be countered by an alkali, but if the pH is too high fermentation will cease and the vat will damage protein fibres. A pH of c. 10 appears to be good for both fermentation and dyeing, although the woad vat should operate down to pH 8. I decided to aim for pH10 in the vat before fermentation starts. According to my pH meter I was bang on. Remarkable! I therefore omitted the 1/2 tsp lime called for by Liles’ recipe; it may be that our rather alkaline tapwater (pH 8.4) rendered it unnecessary.

I bought pH paper – litmus paper – to check the pH of my fermentation vats a couple of years ago, but neglected to check that the range was appropriate. Mine are intended to check the pH of body fluids (don’t ask, I don’t know and I don’t want to know) and the chart only goes to pH 9 whereas for these vats you’ll need them to go all the way to 11. However it seems that the paper will indicate the higher readings, I just have to create my own calibration records based on the pH meter. Note that the pH 10 paper is in fact more blue-green than it appears. The very blue paper on the right was the 1 litre initial stock solution, which had a pH of 11.2.

One thing is very clear from my reading: a good working fermentation vat is as much a matter of luck as judgement. Japanese indigo artisans pray to Aizen Shin, the god of Ai (indigo) for success. I shall drink a toast to Ai tonight, just in case.

I’ve started preparing for the next vat, too. Guess what that will be based on? 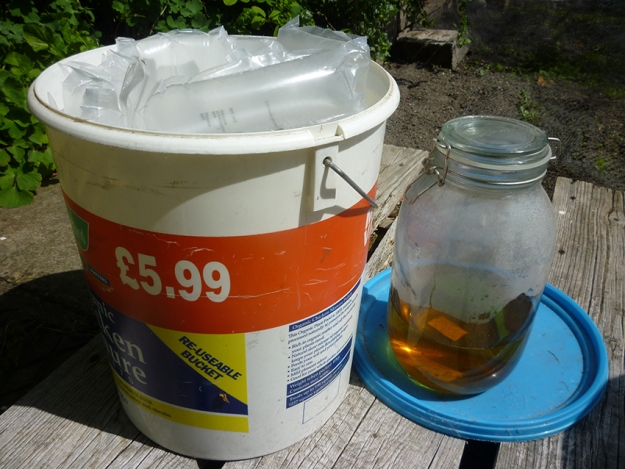 1 thought on “Woad Fermentation Vat No. One, Day One.”