The hand weaver and dyer Ethel Mairet was a significant member of the British Arts and Crafts movement in the early 20th century. Wikipedia has a summary of her life and work here. (“Ethel went away alone and built a house near Barnstaple complete with studios for textile dyeing and weaving” seems such a bald summary of what must have been a terribly difficult time.)

Ethel Mairet is one of my weaving ‘ancestors’, in that my mentors were taught by people who were themselves taught or inspired by Mairet’s work. I had the pleasure of seeing some of her weaving in the flesh at the National Portrait Galleries ‘Anarchy & Beauty’ exhibition, including a jacket woven from handspun eri silk dyed with natural dyes, here shown in A Weaver’s Life: Ethel Mairet, 1872–1952.

Mairet moved to Ditchling, Sussex, in 1916 to join a group of crafts persons including Eric Gill. In the same year (Wikipedia is wrong) she published A Book On Vegetable Dyes (free download from archive.org at that link). Now, a century later, Ditchling Museum of Art & Craft is celebrating Mairet’s work, asking dyers to recreate her recipes for display today.

How could I resist?

I volunteered to work with two of her recipes*, the first being Recipe 8, p69: BLUE FOR WOOL (Highlands), which begins
‘Take a sufficiency of Indigo. (For medium shade about 1 oz. to every pound of wool).  Dissolve it in about as much stale urine (about a fortnight old) as will make a bath for the wool …’
At heart I am about 5 years old: I cannot resist making blue using a smelly technique that other people find revolting. But more importantly, the indigo urine vat is one of the oldest methods of dyeing. I wrote about its history and chemistry here as part of my Summer of Blue. That vat suffered as a result of my inability to keep it warm, but I’ve since found a way to maintain the necessary temperature.

I put the ‘donations accepted’ container in the bathroom and a couple of weeks later the experiment began.

All natural indigo powder contains some non-indigo vegetable matter, the proportion of which is reflected in the cost per gram. The vegetable matter is undesirable not only because it isn’t indigo (and hence doesn’t dye), but also because it adds to sediment at the bottom of the vat that can stain things that contact it. I know from experience that bacterial breakdown of the urine creates sediment anyway, so I used a cheaper grade for this vat, adding about 15g of powder to the 2.5l of the stale urine in a 3litre jar on the 27 November. At this point – having been stored at cold room temperature – the urine was at pH8 and smelled largely of stale urine with very little ammonia.

‘Make it lukewarm.’
The first time I made a sig vat, I tried everything I could think of to keep it warm, from black plastic bins in full sun (or what passes for full sun in a British summer) to an insulated box and a hot water bottle and finally a heating pad. Nothing worked consistently: slow/occasional fermentation would bring the vat into condition, I could dye a small quantity of fibre – and then it would stubbornly remain blue and miserable for days. That failure – when the instructions seemed so straightforward! – drove me to find out how and why indigo vats work. Now I know temperature was probably only one of several failures, and I have the tools to check and correct the performance of the vat.

Last summer I built a den in the garage for my indigo fermentation vats: a sturdy cardboard box floored with a thick layer of insulation, with a tray acting as lid. The cord running into the box powers a home-brew ‘brew band’ that keeps a vat at blood heat. During the summer I used it to heat a large volume of liquid in that plastic bin, but here the bin is a waterbath for the urine vat in the glass jar. I put the jar in the bath to warm overnight while I wetted the yarns from the Ditchling Museum.

‘Put in the wool and keep it at the same temperature till the dyeing is done.’
The plastic screw-top bottle hiding shyly to the left of the box is my ‘spare’ urine supply. Fermentation vats rely on the nutrients in the urine, so I soak dyestuffs in urine to wet them: wetting with tap water will only dilute the urine and weaken the fermentation.

On 28 November, after only 24 hours of warmth, the vat was alkaline, at or near pH10 and smelled noticeably of ammonia. HURRAH, bacteria are digesting the urea in the urine, consuming oxygen and creating ammonia to raise the pH: in other words, this vat is working! 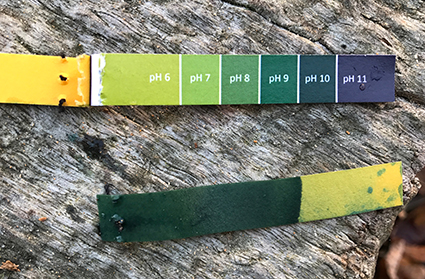 I added the four yarns, each skein suspended by a string to prevent it falling into the sediment that would develop at the bottom of the vat. This wasn’t entirely successful, alas. Better to use a deeper vat with a lot more urine.

‘For a deep navy blue it will take a month, but a pale blue will be done in 3 or 4 days. Every morning and evening the wool must be taken out of the dye bath, wrung out and put back again. The bath must be kept covered and the temperature carefully attended to.’
[I checked the pH as well.]

Taking photos one-handed with an iPhone when also handling something with a pungent, penetrating and lingering odour proved tricky, so I don’t have many photos of the process. Here you can see the characteristic yellow-green of an active indigo vat turning blue before my eyes.

By 10 December the vat was at pH8-9: regular opening and airing allows ammonia to escape as gas, so the liquid became less alkaline, while moving the yarns about added oxygen. Both of these mean more indigo in the vat was returning to its blue non-soluble form.

‘Some add a decoction of dock roots the last day, which is said to fix the blue.’
I didn’t, and I wouldn’t say it. All my research suggests indigo isn’t fixed in that way: once the colourless soluble form oxidises, the particles are either wedged firmly in place or they aren’t. I suppose dock root decoction might act like a glue to coat the yarn and hold the particles in place, but that’s only going to last until the glue is washed out.

I called it a day, removed the yarns for the last time and left them to fully oxidise, slightly thankful that the cold weather means the smell is somewhat less all-pervasive than it was in the summer, when my husband claimed the odour was killing birds as they flew past. 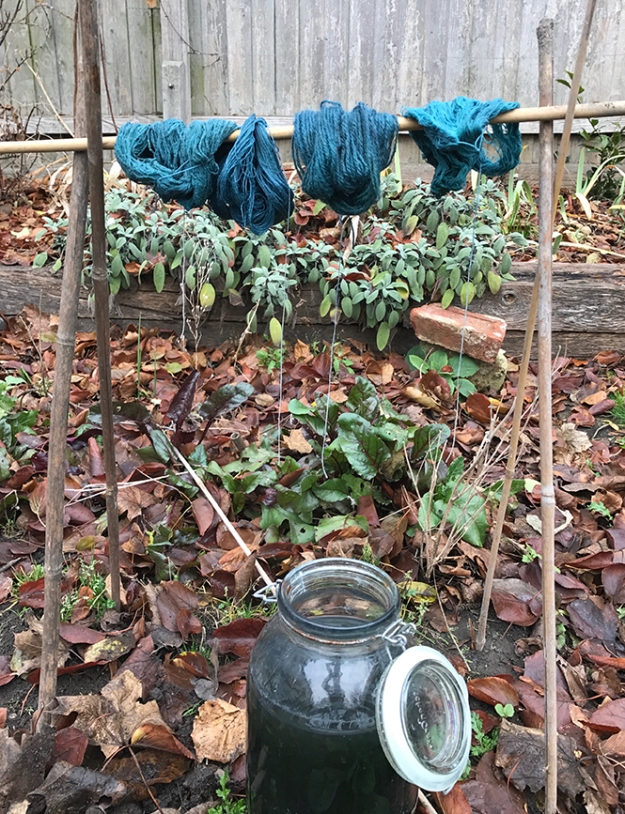 ‘The wool must then be thoroughly washed. This is a fast dye.’
Well, for some meanings of the word ‘fast’. Slow in terms of time, but fast in the sense that it’s generally regarded as wash- and lightfast once any unattached particles of indigo are removed. Jeans and other items dyed with indigo lose colour as the surface of the fabric erodes to reveal undyed material.

I handwashed the skeins in a non-bio detergent for delicate fabrics and rinsed thoroughly in cold water. Given the alkalinity of the vat and our extremely hard water I finished the wool and silk in a final rinse acidified with vinegar. 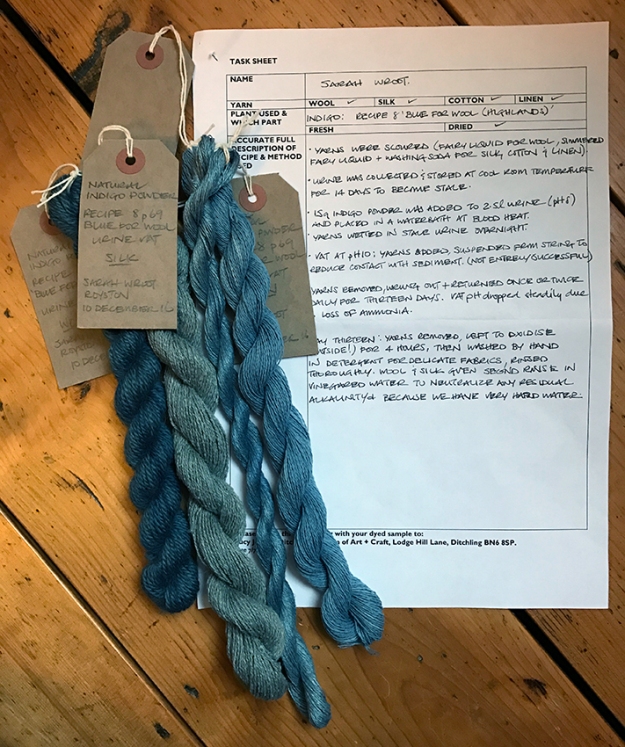 The yarns and process summary, about to be packed off to Ditchling. I am pleased to report they not only demonstrate one of Mairet’s dye recipes, but also the classic ‘vat odour’ that once indicated the finest and fastest shades of blue.

*my work on the second recipe, ‘Extract of Indigo’ (treated with sulphuric acid!) can be read here.