I had planned to focus on indigo last summer, but in the event various other things intervened – although I did accomplish more than I posted. I must show you my shoes! 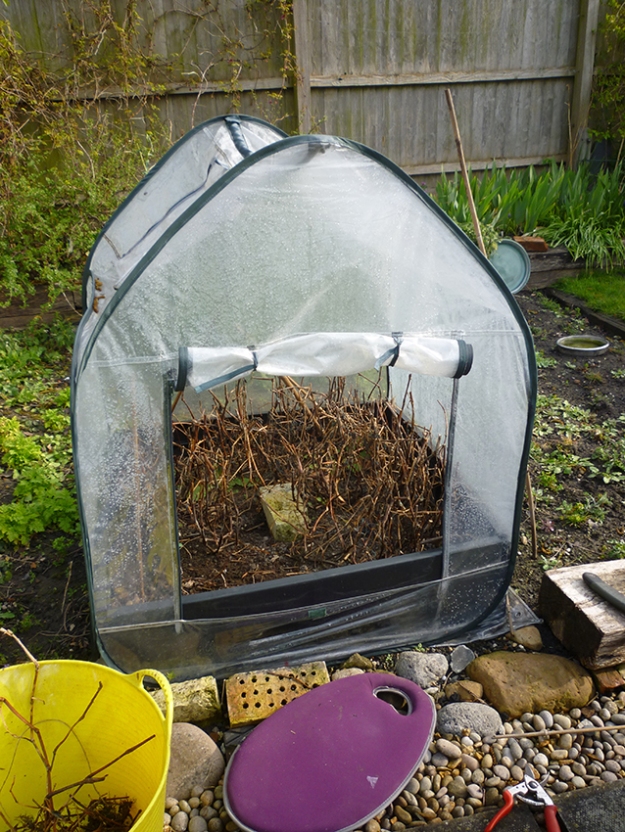 I had hoped that the tadeai, the Japanese Indigo Polygonum tinctorium, would survive the mild winter in its house but even though I added fleece and bubblewrap when the nights dropped to -4C, there’s no life in the stems. It may be an obligate annual, or it may simply have flowered itself to death late last autumn without setting any seed, alas. 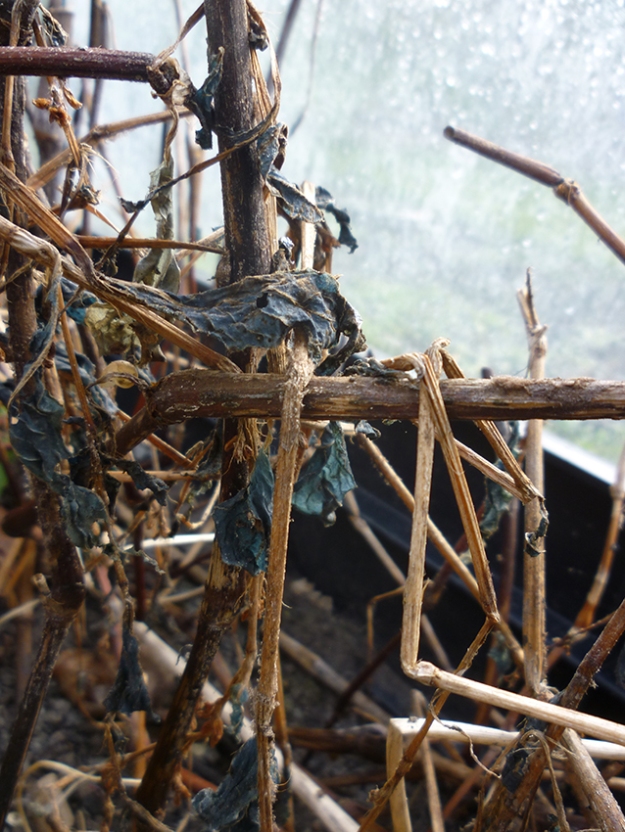 And then cut most of the stems off. I’ve left a few root masses with stubs of stem for the moment, but there was no green in the pith and the roots I pulled up looked brown and dead, so I doubt anything will shoot. But I sowed seed as well; the seed tray is now sitting indoors in the warmth where I am already watching it hopefully.

I took cuttings  – lengths of stems with leaves – from the plants last October when we returned from our holiday and put them in a jar of water. As might be expected from a Polygonum the cuttings formed masses of roots from the submerged leaf nodes, but the rest of the nodes sent out flower shoots.  I pinched them out and more appeared. The cuttings were extremely well-rooted and looked reasonably healthy in late January when I potted them, but just continued to try to flower until they died, leaves slowly shrivelling. A friend who rooted cuttings in August says two are still alive and seem well, so I wonder whether the trick is to catch them before environmental cues set the growth points to ‘flower’ mode. I will try to test that this summer, as cuttings would be the best way to maintain a line that dyes well.

The woad looked reasonably happy. As a biennial this is its year to flower and seed, with leaves that yield little or no blue. I left the plants last year thinking to gather the seed – these were grown from seed I harvested two years ago – but there isn’t really enough space in our tiny garden to keep plants for seed especially when they attract so many Cabbage White butterflies to lay eggs on my salad rocket! The woad is no longer happy: it is composting and I’ll sow more in the Brassica Bed shortly. 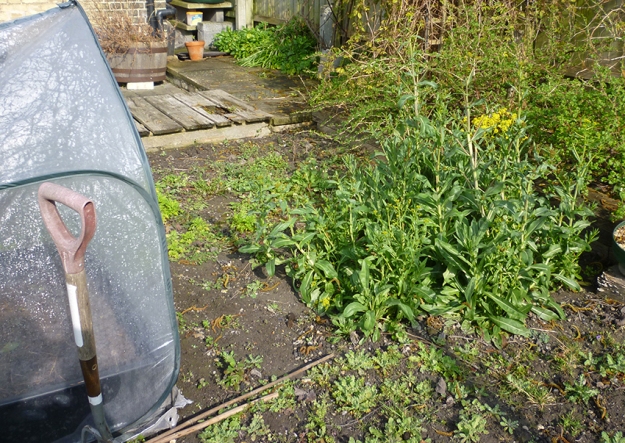 All this plus ‘standard’ indigo vats means there should be more blue this summer. But what shall I do with it? I’m designing stencils to print with fresh indigo leaves, because that was immense fun. But there’s much more fun to be had: a friend sent me two fascinating books. 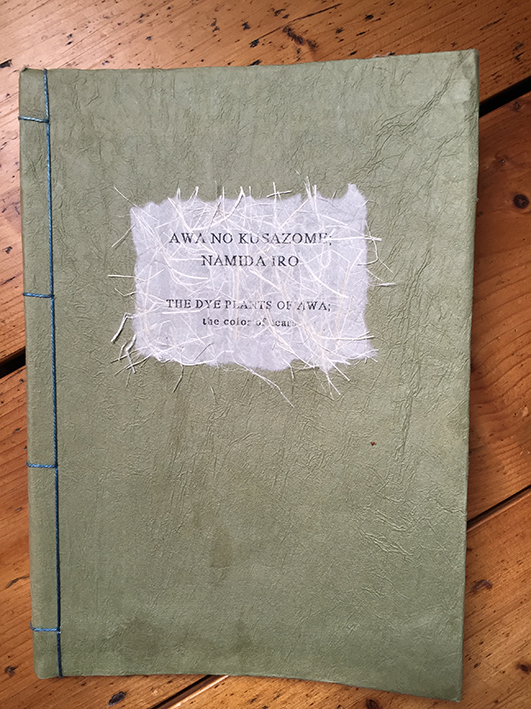 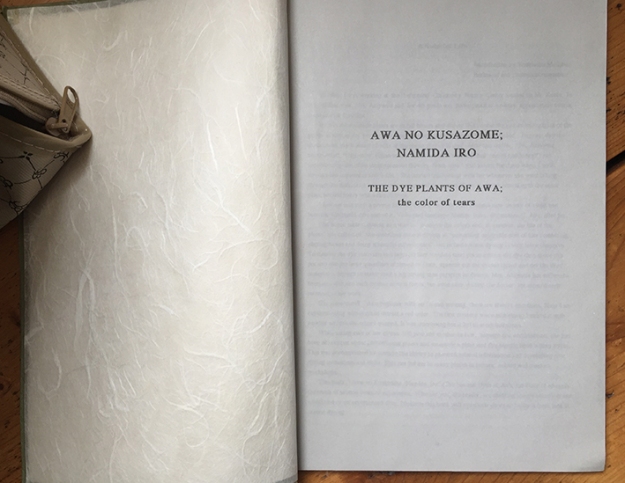 This is the work of Mrs Akiyama, who made a personal study of the natural dye plants of Awa in Tokushima Prefecture, Japan. Awa is famed for its Polygonum tinctorium indigo dyes; there are pages detailing dyeing with fresh and dried indigo (if I’d had more dead leaves I could have dyed with them!) as well as many other plants. And there are notes on working with bast fibres, as well as information on finishing yarns and fabrics after dyeing. 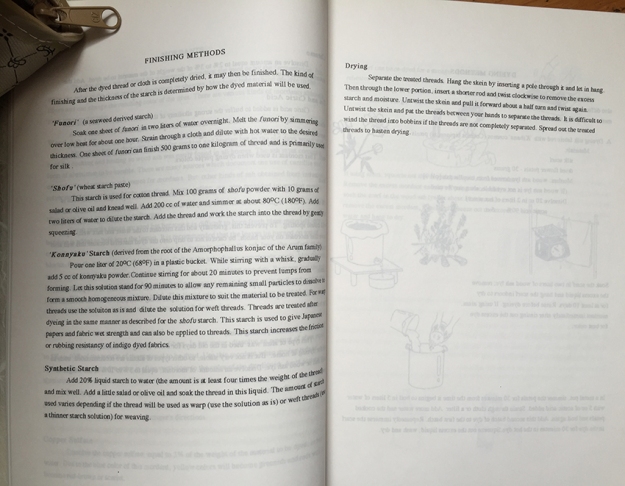 The other book tells me what to do with what I’ve dyed: 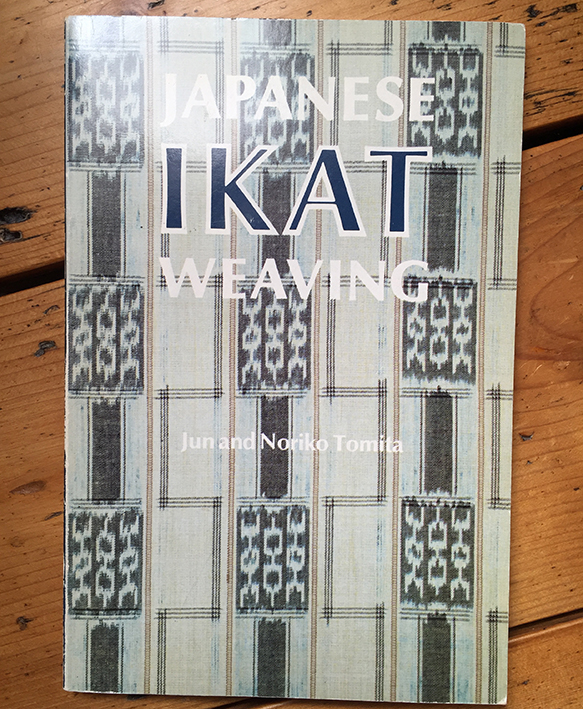 No more peering at fuzzy videos on YouTube! With luck this will be a summer to remember.

To finish, a reminder of last summer. 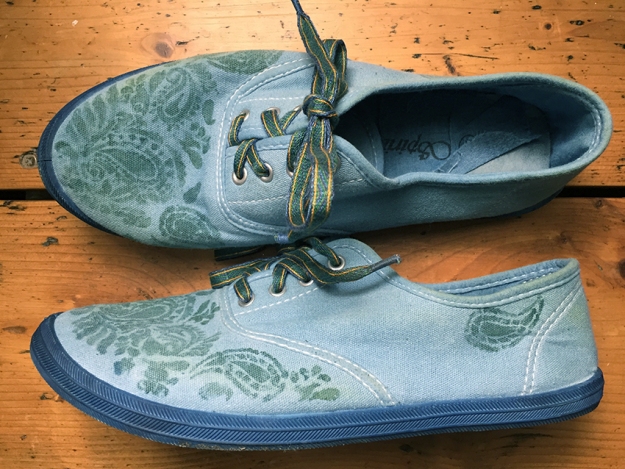 Super-cheap runners, sold as ‘cotton’ (I have my doubts, see below). I washed them thoroughly with dishwashing liquid and rinsed them thoroughly too, then dumped them into a standard thiox indigo vat on the stove.^1 No matter how many times I dipped them, the uppers would not go darker than this; given the depth of blue in the soles. I wonder whether the fabric is in fact polycotton.

The first dyeing attempt was extremely patchy when it dried. Blotches of pale fabric near the heels, more blotches on the toes. I left them outside in the weather for a week or two to think about their sins while I sulked. Then I needed to exhaust the vat, so I reheated it, added reducing agent, and chucked them back (dry, I think), out of curiosity rather than any expectation of success. Imagine my surprise when, after two or three dips, they emerged a relatively solid and respectable pale blue. After washing thoroughly and drying, I considered decoration: stencilling with fresh tadeai was the obvious answer. I cut an assortment of crude paisley stencils and discovered that stencilling on curved surfaces is rather tricky. But the end result is a pleasing variety of blues produced by a variety of indigo techniques, especially when embellished with tablet-woven laces.

It’s a great shame that the shoes are so uncomfortable :-/

^1: A caution. If you try this, be prepared to spend ages scouring melted runner-sole off the sides of the pot. A hint: reheating the pot gently softens the stuff a bit, but it still requires a lot of effort.

Some time ago someone started a ‘Fridays are for Fixing’ thread in one of my Ravelry hangouts. It seemed a good idea – I have lots of fibre-ish things that need repairing – but I couldn’t bring myself to commit to the work. Last Friday evening found me sitting on the couch happily fixing something I love; I’d had a tiny lightbulb moment I’d like to share. 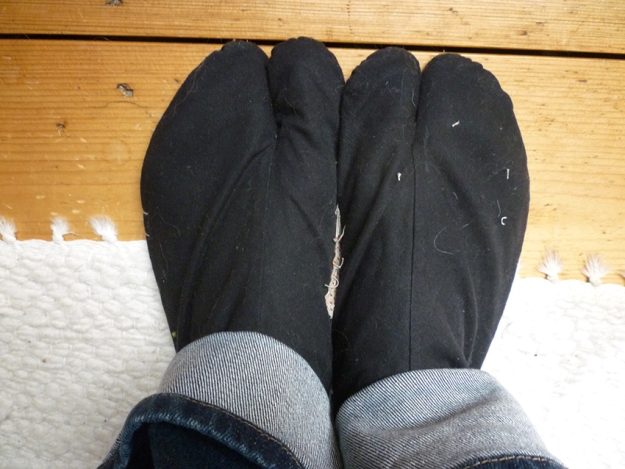 These are my tabi. Japanese sock/slippers, with a gap between the big toe and the rest so the owner can comfortably wear zori, which resemble UK flip-flops or what I called thongs in my Canadian childhood. It’s perfectly possible to ram feet wearing ordinary socks into a pair of flip-flops, but it’s very unkind to the socks. I like tabi. They’re comfortable. 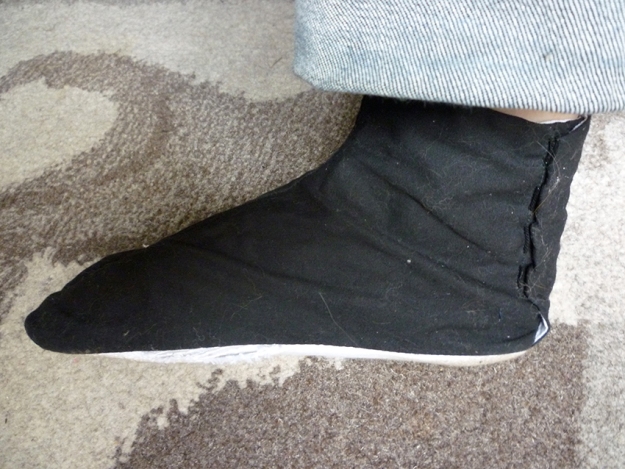 The ankle opening is closed by interesting fasteners, faster than buttons: metal tabs that neatly slide over and behind threads, like hooks and eyes, but larger and very much more … Japanese. Elegant. 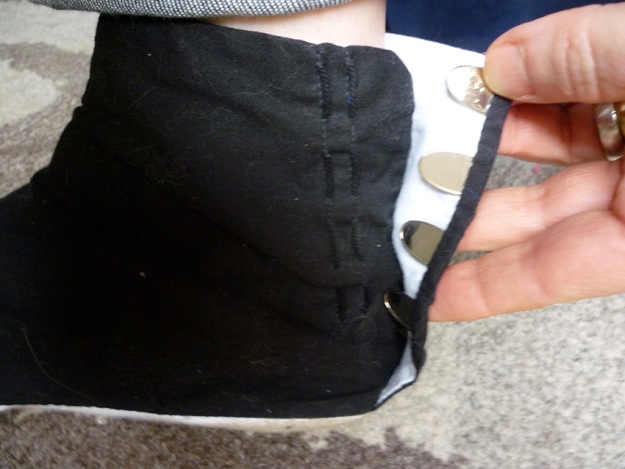 Sadly I haven’t been wearing my tabi because they’re broken: they weren’t very well made and the snug fit that makes them comfortable and safe to wear has pulled the material of the sole out of its seam in several places on both. 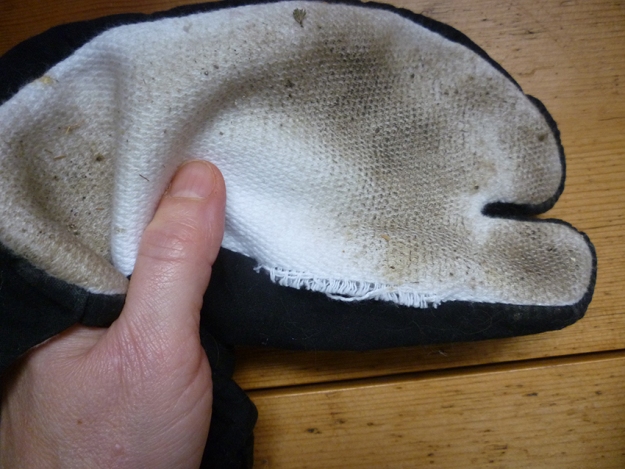 They’ve been sitting in the bag of things to do for almost a year because I was intimidated by the damage. I felt it should be repaired to be ‘as good as new’, and I couldn’t think of a good way to do that; there’s simply not enough fabric to mend that seam. I could handstitch entirely new soles, but for the work involved I might as well buy a new pair. Or make my own, which is on my short list of projects, but I’m waiting until I have some special fabric for that. Last week the solution became instantly obvious as I cut up an old pair of my husband’s trousers for scrap fabric to test slipper patterns, stacking the pieces next to my sashiko project bag. Sashiko is the Japanese art – it IS art – of repairing, reinforcing and embellishing fabric with simple stitches. I’m fascinated by it, and by boro, the textiles (usually indigo-dyed ‘country cloths’) that have been patched and mended using these stitches. Personal revelation: I didn’t have to make my tabi as good as new. I just had to make them function as they should. I didn’t have to use indigo cotton and white thread, I could use whatever I had, which is true to the tradition of clothing repair. What I have is pieces of trouser leg and a box of embroidery threads, some of which are over 40 years old. 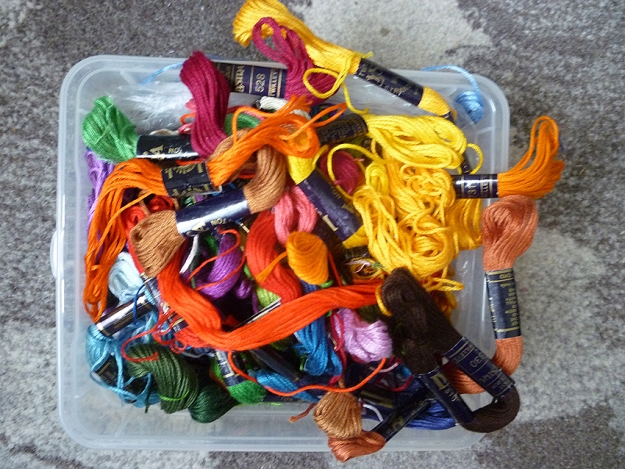 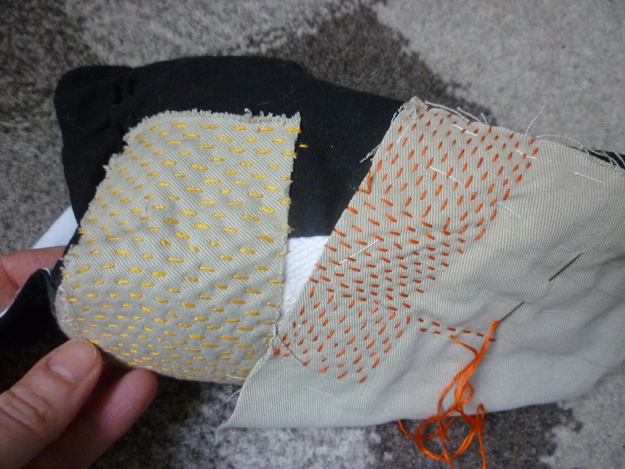 I tested the patches before I started and no, I can’t feel that overlap. The repair might not last a long time – the embroidery thread is probably a bit too fragile – but it should last long enough for me to make my own slippers.

I’m not a seamstress. I’ve done my best to avoid sewing for most of my life. But I’m beginning to enjoy it as part of the process of bringing real things into existence. I hope I’ll get better at it. I think I will. 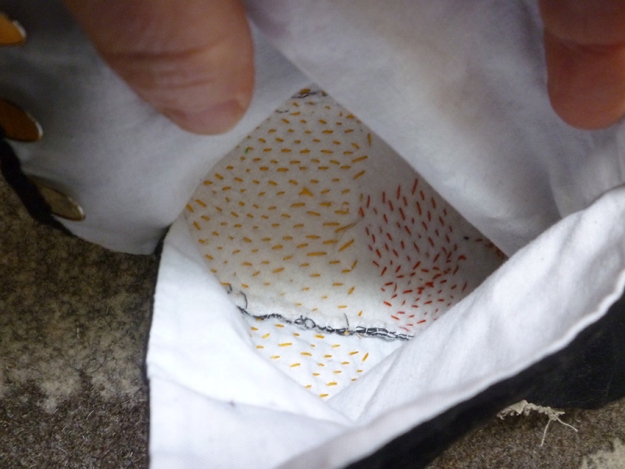 After all, practice makes perfect and I’ll get more practice now that I know perfection is not the goal. Fridays are indeed for fixing.