As I described in part I, Highland Blue, the Ditchling Museum of Art & Craft is celebrating the centenary of the publication of Ethel Mairet’s A Book On Vegetable Dyes by asking dyers to replicate the recipes. Because I have a thing for blue I volunteered for two of the indigo recipes; this is the second.

p66. 2). To MAKE EXTRACT OF INDIGO.
4 oz. sulphuric acid, 1 oz. finely ground Indigo. Mix like mustard,  and leave to stand over-night. Prepare the wool  by mordanting with 5 oz. alum to 1 Ib. wool. Boil for 1 hour and dye without drying.

This is the dye also known as Saxon Blue, Chemie, Indigo Carmine, sulfonated indigo, indigo sulphonate, and indigo sulphate, which according to JN Liles in The Art and Craft of Natural Dyeing, was discovered in 1740 not long after concentrated sulphuric acid was first made. In my mind’s eye I see a chemistry lab with in which people in lab coats pour this new acid on everything they can think of, just to see what happens, but I suspect it was much more directed. New colours and methods of dyeing textiles were much in demand, so perhaps it was logical to experiment on indigo. It’s completely different from the ‘Saxon Vat’ of the peasants of Saxony in which the fermentation of matter in unscoured fleece drives an indigo fermentation vat.  Although indigo sulphonate is said to have first been used in Saxony. Clearly a hotbed of inventive dyeing, Saxony.

Anyway. In short: the addition of sulphuric acid to indigo converts the indigo into an acid dye, with the sulphuric acid content of the dye bath acting as the acid to fix it to the dyestuffs.

I’d been wondering about trying a sulphuric acid indigo blue long before the Ditchling Mairet project. Blue and smelly is good, blue and DANGEROUS is just as attractive to my inner 5-year-old. But as with ‘ordinary’ indigo, I needed to understand the process before I started. There’s a lot of information on the internet. I was charmed by p255 of ‘The Practical Mechanic and Engineer’s Magazine’ for 1843 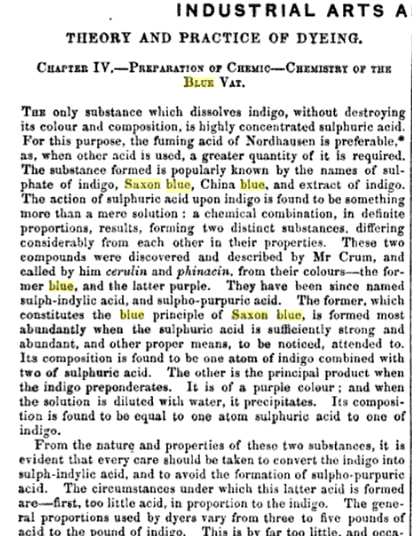 An excerpt from this delightful publication.

which explains quite simply the basic problem I faced: as a private individual in 2016 I can’t buy strong enough acid. 98% as sold on Amazon *sounds* strong, but it’s not: ‘fuming acid of Nordhausen’ is in fact 102% by volume. I will not take you down the by-ways and cul-de-sacs I explored online investigating the solubility of indigo (it’s remarkably recalcitrant stuff) or the phone calls and plaintive emails sent to various chemical suppliers begging them to send me the good stuff. I offered to come and collect it so they could assess my harmless middle-agedness themselves. The answer was always No, Sorry, We’re not allowed to. So I ordered what I could get (which is sold as drain cleaner),  an assortment of lab glassware, and some safety kit.

CAUTION: DO NOT even think about trying this unless you have experience working with strong acid and are fully aware of the hazards and precautions necessary. 98% Sulphuric Acid might be weak for my purposes, but it’s strong enough for the fumes to damage your lungs and eyes. The liquid will burn holes in most things including human flesh.

I faffed a bit about the quantities because clearly, given I had 98% acid, this would be as much art as science. In the end I used 15g of my most expensive indigo powder to 113 ml sulphuric acid. Mixing the Extract of Indigo was quite straightforward. It does mix ‘like mustard’ – it takes a lot of stirring to thoroughly wet the indigo powder. Better to start with a very little acid and work into a paste before adding the full volume. There was no visible reaction when I added acid to the indigo powder but the reagent flask gradually became gently warm to the touch so heat evolved.

Some recipes for Saxon Blue suggest adding chalk to the mix; Mairet doesn’t, and Liles says there’s no need, so I didn’t.

‘leave to stand over-night’
It’s clear from much that I’ve read (including Liles) that this extract in fact benefits from a longer reaction time – if it is well-sealed so the acid can’t absorb water from the atmosphere – so I wasn’t concerned when I couldn’t use it exactly 24 hours after mixing.

The books agree that Saxon Blue is a dye for wool and silk, which makes sense because acid dyes require an acid (low) pH. Acid conditions render cellulose fibres (cotton, linen, ramie) less able to absorb dye; a friend familiar with the chemistry of paper (also cellulose) says “Higher pH on cotton produces very strong covalent bonds. Less pH value, weaker, if any, bonding.” (thanks, Terry!) So the dye particles simply don’t stick to cotton and linen under acid conditions. I had samples of wool, silk, cotton and linen to test this. I mordanted the wool and silk with alum and cream of tartar, one skein each of cotton and linen with alum and washing soda, and left the spare pair of cotton and silk unmordanted out of curiosity.

Mairet instructs readers on the use of the extract in various other recipes.
3) To Dye Wool With Indigo Extract: For 4-6lb of wool. Stir 2 to 3 oz of Indigo extract into the water of the dye bath. The amount is determined by the depth of shade required. When warm, enter the wool, and bring slowly to the boiling point (about 1/2 hour) and continue boiling for another 1/2 hour. By keeping it below boiling point while dyeing, better colours are got, but it is apt to be uneven. Boiling levels the colour but makes the shade greener…

Given that this is basically ‘add what you think looks right’ I worked from Liles’ recipe, reducing the quantity of extract for my 3litre pan. 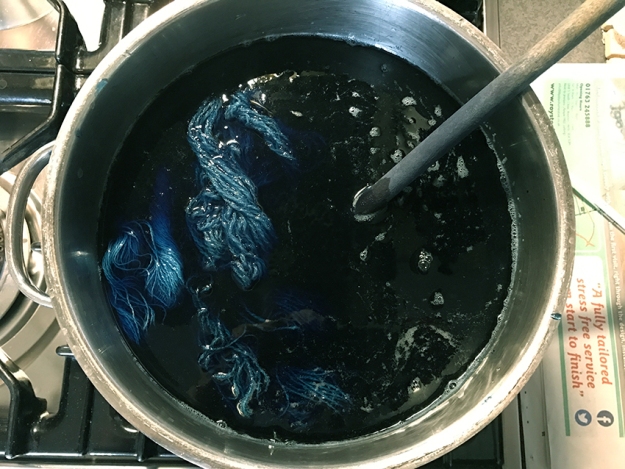 The colours are not quite right in this, thanks to weird light from both cooker and room lights. It was a little more turquoise than it looks, visibly different from ‘ordinary’ indigo blue. Also, as the dye heated, it developed the chemical odour I associate with rooms full of weaving yarns: not wool, nothing to do with wool or lanolin, a rather sharp indeed acid chemical smell. Very interesting. I opted for a gentle simmer rather than a boil as I wanted ‘better colours’. After 1/2 hour at about 85°C I put the yarns in the sink to cool and ran the dye bath to waste with copious water. And then kicked myself, almost literally, because I forgot to check the dye bath pH at any point. Next time. 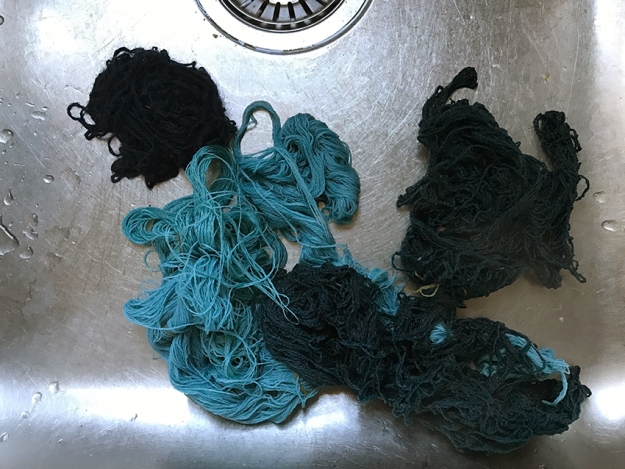 On my machine those colours are about right. The pale yarns are the cotton and linen, as might be expected; note there’s no obvious difference between mordanted and unmordanted. The dark are one wool and two silk. Again, no difference in shade between mordanted and unmordanted silk. Once they’d cooled, I began rinsing, and things became interesting because the silk lost a lot of dye. A LOT of dye. I tried to hurry it along by washing a second time with dishwashing liquid rather than gentle soap, but I left it in the water to soak out the detergent and the water turned dark blue again. I put the yarns in clean water and left them overnight: in the morning the water was dark blue. Something interestingly chemical was happening to strip the dye, I think. But I’m not a chemist-dyer, I’m fermenting organic smelly sludge dyer so I need to do some reading. 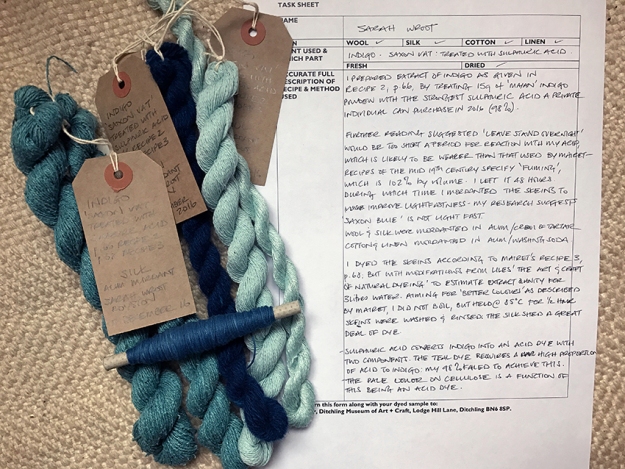 And here is the result, reskeined with the Ditchling Museum Project Record. I’ve added a bobbin of cotton dyed with with an ‘ordinary’ indigo vat for comparison: it’s clear to my eyes at least that the Saxon Blue is more teal, somewhat greener than the ordinary. But sadly not nearly as green as the example I saw produced by a friend with access to Fuming Sulphuric: the stronger the acid, the higher the proportion of green ‘sulph-indylic’ dye formed by the reaction. But still, it is very pretty. 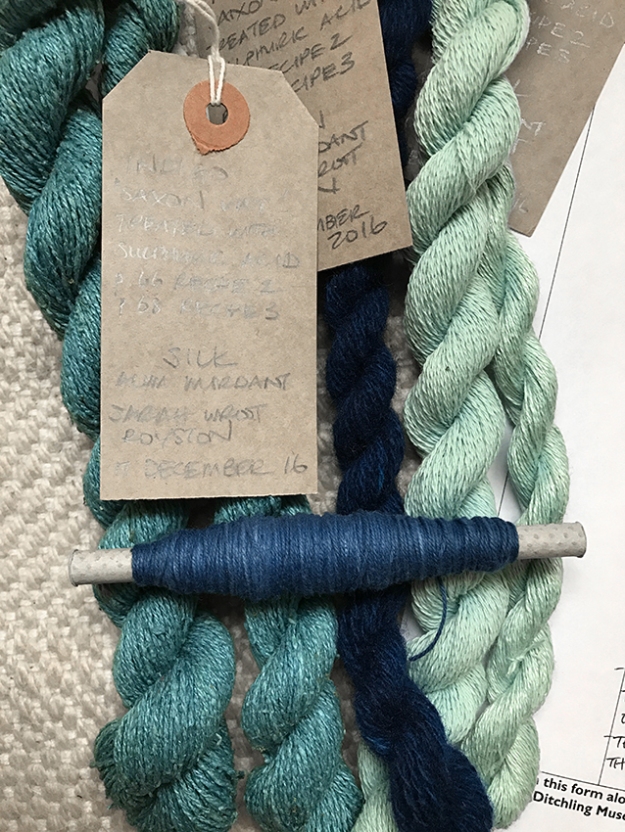 Now I’m thinking of offering an Indigo Dye workshop next summer, working with fresh leaf indigo and/or woad, plus at least two vats. If I do I’ll happily accept 100ml lab grade fuming sulphuric acid as part payment from one attendee!