I think I’ve mentioned somewhere that I’m a hand spinner. I use my hands and various tools such as spindles and spinning wheels to make what I’ll loosely term ‘yarn’  from loose fibres by twisting them together. It’s an ancient skill. Yarn and the cloth made from it doesn’t usually survive to be dated (it rots, especially the early yarns made from plant materials), but sometimes the impressions of texture and pattern made by cloth and string in mud or soft soil do survive. Fragments of clay found in the Czech Republic show the pattern of cloth thought to have been woven 27,000 years ago. Some of the ‘Venus’ figures found in Europe dating from 20,000 BC have carefully carved string skirts, some so detailed that they show the skirt string is plied. Left dangling loose, a single strand of twisted fibre rapidly untwists to become loose fibre. Only if two strands – known as singles – are plied, twisted together in the opposite direction, will the dangling string remain string. Given the skills demonstrated by the things that have survived, it’s been suggested that people – probably women, as men are traditionally hunters – have been spinning fibre into string/yarn for over 40,000 years.

That’s many, many generations of my female ancestors. Only for the last 300 or so of those 40,000 years have women not needed to spin, at least in western Europe, where I come from. I am descended from a long line of women who could spin, and spin well, because the yarn they spun was needed to cloth their families, to be sold for money to pay the rent or feed their families. In the early days the string they made would have been knotted into nets to catch fish and birds. If my ancestors hadn’t been good, productive spinners, they and their children wouldn’t have survived. I wouldn’t be here.

Lynn, I search out antique handspun textiles because handling those textiles, learning new skills by examining them, is a direct link with the people who made them. For me, it’s all about the people, not the finished piece. I don’t care if something is tattered, too badly damaged for a ‘serious collector’: the ragged edges and loose threads mean I can see how it was made, whether the yarns are plied or singles, estimate their grist. I can extract individual fibres (of wool) to estimate staple length and fineness of fleece. Knowing these things I can try to replicate the yarn. Spinning it, I remember with respect the person who spun the original.

So. Here is a piece of linen lace in the style of Alençon, in northern France, dated by style and condition to the 18th century (1701–1799). Pre-Industrial Revolution, there’s no doubt the thread used for this was handspun and, for lace, of the finest quality at the time. Because in this condition it is of no value to a collector 48″ of this cost £5, but to me it’s beyond valuation. It’s 48″ of people’s lives: the skills of the flax grower, the processors, the spinners, the lacemakers. 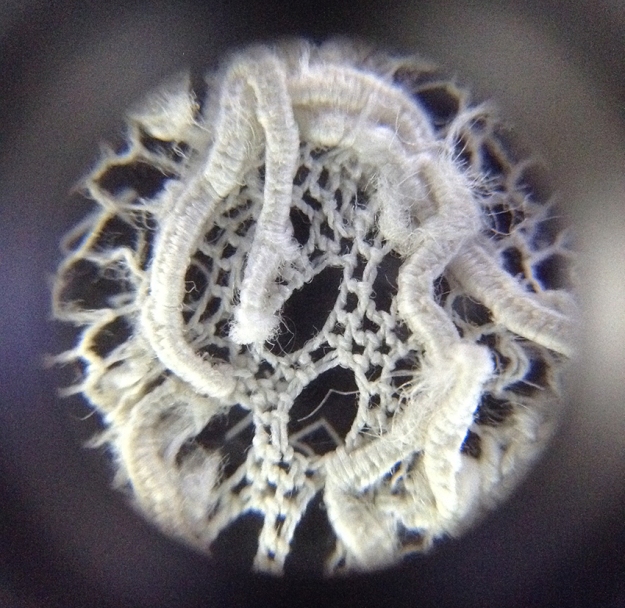 Detail of the lace magnified 20x. The lens circle is 1cm in diameter.

The damage allows me to examine the individual strands of yarn more closely. 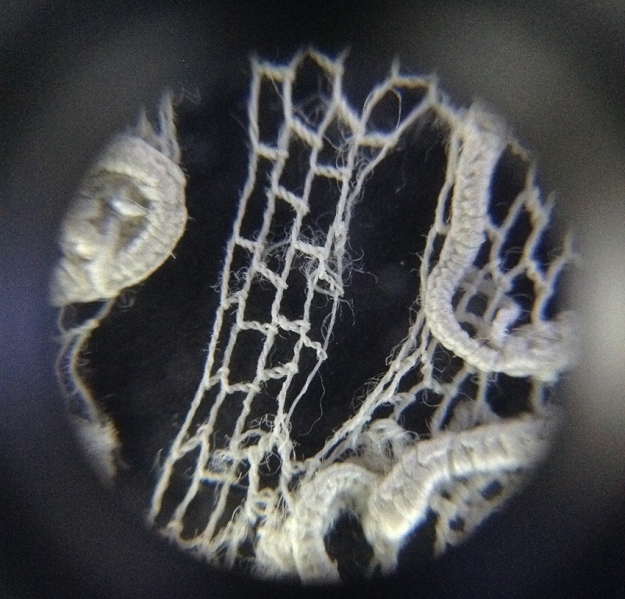 Above, a damaged area magnified 20x, showing what seems to be a single thread.

Below, the same area magnified 80x. 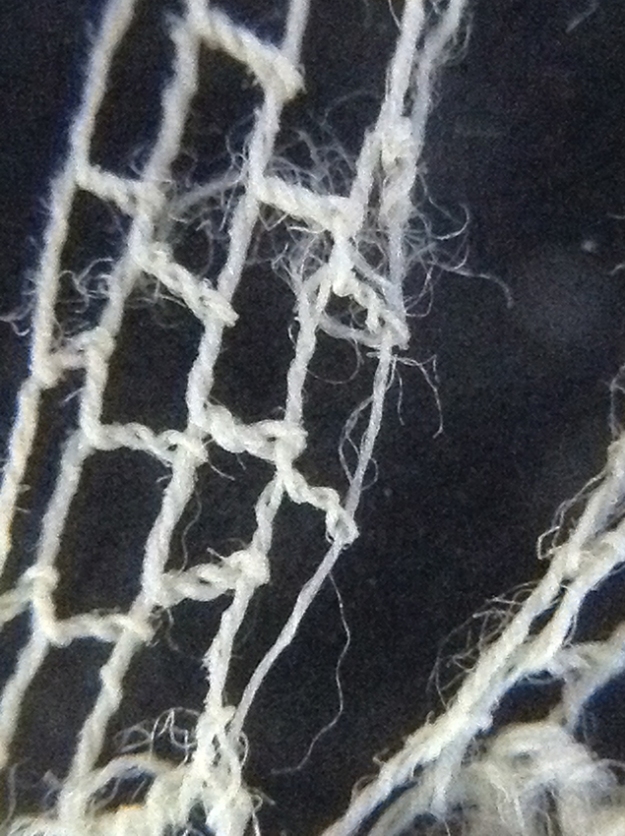 The lustre of the individual threads and the ‘hand’ of the fabric, even after more than 200 years, suggests this is linen. I am awestruck by the fineness of the fibres in the yarn: having done some flax processing myself (this link shows the basic principles), I have some idea of just how tricky it would be to get fibres this fine. Having spun flax, I have some idea of what it takes to spin this fine. At this point I’m not even sure whether this is plied or a singles yarn. I did find a description of the spinning process in Cassell’s Illustrated Family Paper, Vol. 4 1865 on Google Books:

“Why, the flax of which the old Brussels and the point d’Alençon were made, was cultivated on purpose; it was chiefly grown in Brabant, Halle, and Courtrai, and had to be spun in underground cellars, because contact with external air made the thread brittle. The thread was so fine as almost to elude the sight; the spinner had to go by the sense of touch, examining every inch as it left the distaff, and at the slightest irregularity stopping the wheel. The room was kept in darkness, except for one single ray of light arranged to fall on the thread, which was thrown up by a background of dark paper … “No wonder,” said Goody, “that fine lace is so costly; why, I have read lately, that at the present moment, hand-spun thread is often sold at £240 sterling for one pound only.”

All that from a piece of old lace.