At the end of the Depot tour we handed back the hi-viz vests, piled into the vans and headed at some speed (we were running late) for the Haworth Scouring Plant, itself once a cashmere processing plant, passing other disused cashmere processing plants and discussing the sad, rapid decline of the industrial north. We parked outside a nondescript building, with odd scraps of fleece on the ground suggesting there was wool-processing nearby. A gate opened to reveal even more fleece on the ground:

We walked between bales of UK fleece in orange wrappers, Irish fleece in yellow wrappers, fleece from the Mediterranean in sacking and from Norway in white plastic (fleece from overseas is certified free of disease before importation), all waiting for imminent processing. LOTS of fleece in the queue to be processed and a warehouse full of bales waiting their place in the queue. And this shows why The Campaign for Wool is an international campaign: many countries produce wool and many produce much more than the UK does. Even if a purely British campaign managed to increase the price paid for wool in Britain, the UK market would be flooded by wool from elsewhere. And, after all, most of the UK clip does go into carpets, not garments sold on the high street. So The Campaign for Wool is working to increase the profile of all wool, to publicise the value of all wool everywhere because (as someone said at Bradford) “A rising tide floats all boats”: raise the price everywhere and producers everywhere will benefit. Anyway, back to the tour. All the wool outside will come here: 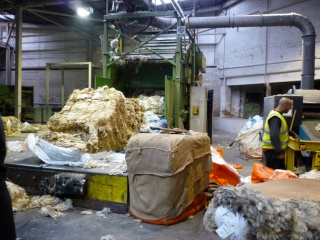 Strapping and wrapping is removed from the bale and it’s fed to the Big Green Machine on the left, which begins the process of opening the fleeces for processing. Cotted fleece (a separate grade at the Depot) goes first to the machine on the right, known as the Piranha, to be ripped open more… forcefully. The ducting from the Piranha feeds into the Green Machine, and from there all the fleece is blown through into the next room.

From this point my photos cannot do justice to the plant, let alone Martin’s enthusiasm as he showed us through it! Everything is just Too Big. There are two processing lines; the huge bins to each side of us as we walk into the works contain fleece being further opened as it moves toward the washing line. If you click for bigger on the photo above, you can see a set of steps; we climbed those and then a second set to get to the point where fleece emerges ready for washing. Now, in addition to the noise and the smell of industrial quantities of wet fleece (not as pleasant as my one fleece in my kitchen), we encounter steam and heat, which is why the camera lens is fogging. My camera does have a hard life, poor thing

Here the fleece is about to be fed into the first ‘bowl,’ as the washing containers are called. It’s a misleading name, they’re actually huge tanks. Water temperature and other aspects of the line are computer-controlled so that different types of fleece can be handled with varying degrees of delicacy. The first bowl is the hottest, running without detergent at 70°C at the time of our visit, which combined with my camera temperature to yield only wonderful pictures of lens fog. 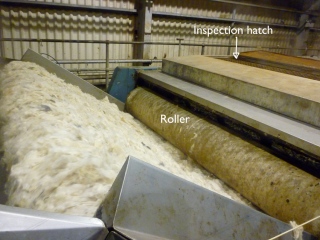 Above is one of the bowls a little further down the line (there are 8 in total); the line is moving from right to left. To give you some idea of scale, I’d guess the roller pressing excess moisture out of the fleece is 5–6′ wide. We peered into the inspection hatch and saw a mechanism that looked much like rows of wide-spaced fingers propelling the fleece through the water. I didn’t think to ask how much water the plant uses, but I did ask if they had difficulties meeting environmental quality regulations, and was told no, that Haworth has its own in-house water quality laboratory, bought lock, stock, barrel and specialist when another firm went under (we saw the lab later in the main building). Also, as later became clear, the dirt in the water is in fact money, so they want it out: there’s truth in the saying “Where there’s muck there’s brass.”

Here Martin is holding a handful of clean fleece. And it is clean: Haworth takes residual fatty matter down to 0.2–0.3% by weight, whereas some fleece processed in China is at 4%. 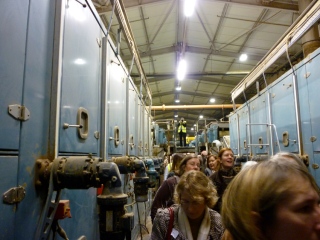 And then the driers. This perhaps gives the best idea of the length of the processing lines (there’s Tim Booth of the BWMB standing at the end of the washing area, taking a photo of me taking a photo).

Now this was rather cool. Or rather warm, in fact. Haworth takes as much care as the BWMB to ensure uniformity in its bales. Here the dried fleece is blown in horizontal layers to fill a container roughly the size of a semi-trailer. Once it’s full they unload it from the front in vertical layers, blowing it to their own baling setup: 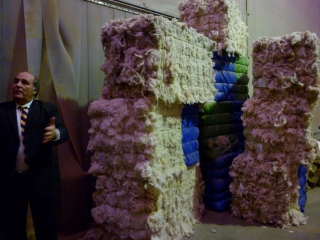 They’re very proud of their washing plant: these bales, which look just as clean as any other fleece we saw at this stage, are in fact sweepings off the road we walked down.

And here’s part of the store of clean fleece ready for further processing. The gold bales on the left are fleece from the best of British, which they hope to promote for the Olympics; the blue is their ‘ordinary’ and the unwrapped bales go straight to their own processing plant across the yard. So we walked across the yard

where we had a fine view of the set-up to reclaim lanolin and other waste products from the wash water. The lanolin is shipped out in those black ex-orange juice barrels for a variety of purposes. The soil/muck is used in soil reclamation projects, as it’s rich in plant nutrients.

Are you bored yet? We weren’t. We were excited! 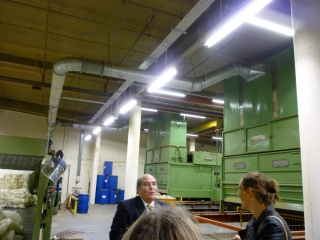 To the left you can just see part of the machine that opens the bales of washed fleece and anything else – tag ends of roving and so forth – ready for the drum carders. Those BIG green things on the right are industrial drum carders. Didn’t look like much at this end, but

LOOK! spinning fibre! There was a swirl of excited laughter and everyone who spins tried to take meaningful pictures. Basically the sheet of fibre (it’s at least 6′ wide) is fed off the last drum and laid down into the big white bin. I couldn’t count the big bins of fibre visible in this space, and I was so overwhelmed I forgot to even try to take a picture of them. Basically it’s a giant space full of fibre like this:

Some of the roving is fed into combing machines, like this one: 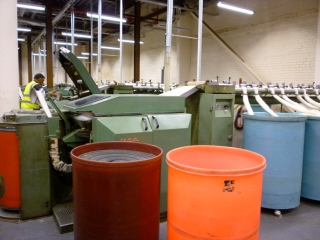 And the end result is fed into even more big bins, then weighed out into 10kg bumps.

And here’s the thing. Each of those bumps will cost you £4.50 – if you buy 10,000kg or more. That’s not a lot of money, really, for what they are. I look at that bump and imagine sheep cared for by farmers across the world, sheared and graded by a diversity of shearers, passed from hand to truck to be shipped to the UK and … here it is for us to admire and manufacturers to purchase: wool. It’s a wonder-ful fibre. Wear it with pride!

And finally, yet more fibre. Upstairs, above the offices, past the lab, we found a room of wool.

It’s the home of the Real Shetland Company! British breed fibres! Yarn! I wish we could have stayed longer… I didn’t really need to eat lunch.

If you enjoyed this, Lesley’s blog here gives an overview of our Big Day Out with some of the facts and figures I can’t read in my notes…

And now a different but related plea. You may have read about Wovember, the campaign to celebrate the fact that real wool comes from real sheep. If not, please take the time to read that link, and Kate’s ‘woolly thinking’ blog posts about how sloppy or actively misleading advertising may mean people buy not-wool when they thought they were buying wool. Take care to read the labels on garments you’re thinking of buying and, if you feel bold, mention your concerns to someone in the shop. Hand on heart, I have sworn to do this myself.

3 thoughts on “A Bradford Adventure part II: the Haworth Scouring and Combing Company”